In the typical busy lead up to Christmas, it can be tricky to find enough time to reflect on the year. However, from an economic/insolvency perspective, a couple of key observations can be made:
Corporate Insolvency

3. The percentage of companies entering insolvency relative to new incorporations is currently below the long term trend of 6% as depicted below. We believe that the ratio is likely to return to trend during FY16. In this regard, we have recently heard economic commentary indicating that there are likely to be some economic challenges for the Australian economy in the next year. As a result, we believe these challenges are likely to mean higher levels of company insolvencies flowing into FY16. 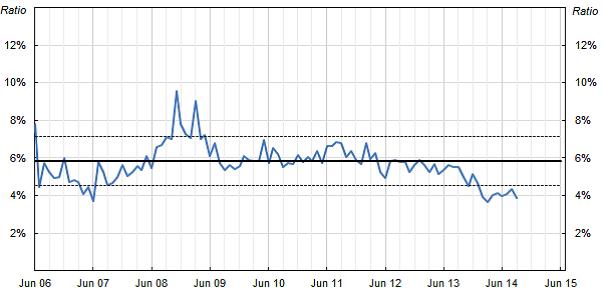 1. In the last 13 quarters, bankruptcies nationally have decreased in all but 3 quarters (those being March 2012, September 2012 and March 2014). Whereas during the same period, debt agreements (or consumer style Part X arrangements that are actively marketed on TV/radio etc) have increased in every quarter, but 1 (that being March 2013). This is depicted in the graphs below.

3. We remain cautious about the apparent growing popularity of debt agreements, particularly when considering as at FY14 approximately 40% of debt agreements entered into in FY09 were still incomplete. Or put another way, debtors had been subject to the agreement for 5 years and their obligations still not complete, whereas bankruptcy generally only goes for 3 years.

4. We continue to stress that debtors seeking to deal with their financial position should ensure that they obtain professional advice so that they can ensure they understand all the options and how they may be impacted by them – as opposed to being lured by slick advertising.

I am continually surprised by company directors/business owners and individuals that don’t get the right advice or any advice. This quite often can be due to a state of being so overwhelmed (and in some instances a feeling of failure) that they try and deal with the crisis themselves – rather than seek assistance. Remember a problem shared, is a problem solved. As trusted advisors you can encourage clients to seek the right advice and get back on track.

My firm has the knowledge and expertise to deal with a variety of financial difficulties that SME’S and individuals may encounter and we spend the time to make sure there is a proper plan to deal with the financial stress. In this rushed world that we all live in, it is important where we have knowledge that may be of assistance that we offer this assistance to help those see that there is “light at the end of the tunnel”.

I wish you all the best for the upcoming festive season and 2015.