The ATO’s Second Commissioner of Compliance, Mr Bruce Quigley recently released the Compliance in Focus Program for the current financial year. For those that may wish to read the entire version please go to www.ato.gov.au . As mentioned in the document, detection of non-compliance “ is achieved by analysing and matching information reported to us”. As some readers may be aware, the ATO works with other state and federal government agencies and other third parties, such as financial institutions to obtain information. That information is used to identify discrepancies including non-lodgement and under-reporting. Where the taxpayer fails to rectify errors or omissions, the Program highlights that the ATO will take action in the form of reviews and audits, final notices, penalties or legal action.
Whilst there is nothing to startling in the above, it lends support for the course of action that the ATO has taken over the past couple of years – that being the ATO appears to be more active in the compliance mode. I have seen this first hand through the use of the Director Penalty Notice (“DPN”) regime. Such DPN regime was amended in June 2012 to extend personal liability for directors regarding unpaid superannuation guarantee charge (“SGC”) amounts, but also involved the introduction of a “lockdown penalty provision” which results in automatic personal liability of directors in circumstances where either PAYG withholding or  SGC amounts are both unpaid and unreported for a period of more than 3 months after the due date.

With almost half of all tax collected by the ATO coming from employers, the ATO has stated in the Compliance in Focus Program that “we will pay particular attention to those who may not be meeting their obligations …… to ensure they are withholding and reporting the correct amount of PAYG withholding”. With SGC rates having recently been increased to 9.25%, the ATO will also be focusing on payment of the superannuation guarantee.

When looking at medium-sized businesses (classified as between $2million and $250million), the ATO will continue its focus on fraudulent phoenix behaviour. Notably, the ATO reveal “we have identified over 2,000 property developers who have placed companies into liquidation with outstanding GST obligations on multiple occasions…… In 2013-14 we will engage with developers who do this by demanding lodgement, enforcing payment and applying penalties.” Importantly the ATO indicate that they want to reduce phoenix activity by monitoring, auditing and enforcing debt collection. This includes the ATO using the new DPN regime to make directors personally liable for their company’s outstanding PAYG withholding liabilities and employee entitlements, being superannuation guarantee.

A further focus will be the analysis of the information received under the new Taxable Payments Reporting regime that started on 1 July 2012 requiring businesses that operate in the building and construction industry to report payments they make to each contractor each financial year. It will be very interesting to see this project a couple of years on when some of the data matching activities have been underway and what enforcement action the ATO is taking regarding non-reporting of income by contractors.

It is increasingly important for company directors, particularly those in the medium-sized business segment and even the micro segment to understand that the ATO has expanded its ability to extend personal liability to the director for certain company taxes. Whilst one can ponder whether it may ever be extended to GST, the message is clear, taking a position where you don’t report and don’t pay is very likely to mean that you are likely to be queried by the ATO about the poor compliance of the company. However by this time, it may well be the position that under the new “lockdown penalty” you are already exposed to a significant liability. Early intervention and professional advice is the key if you believe that your company is not meeting the liabilities for these taxes. I have advised many company directors in this zone and continue to actively monitor the stance of the ATO in this area.

Personal Insolvency Agreements (also known as Part X Arrangements) also declined for the quarter by almost 24%. However it should be remembered that they only account for only about 1% of the total personal insolvency activity numbers. Part X Arrangements whilst still a viable option have significantly reduced in number over recent years as creditors tend to take a more active role in ensuring that individuals are held to account within the terms of the Bankruptcy Act. As such the prevalence of Section 73 compositions can tend to be more favorably considered by creditors because the Bankruptcy Trustee has had adequate time to investigate the individuals financial affairs. Therefore creditors can have more confidence if a Section 73 proposal is than put to them during the bankruptcy.

As a Registered Trustee, I regularly advise individuals in financial distress about the options available to them so that they can take control of a very stressful period in their lives.

Jones Partners hosted its inaugural “State of the Economy & Industries at Risk” this week. The presentation was given by CEO and Chairman of IBISWorld, Phil Ruthven. One of the major points Phil raised when discussing levels of corporate insolvency / liquidation was that almost two-thirds (or 67%) of corporate failures were attributed to internal risk factors. This certainly appears to correlate with our own research and that of Australian Securities and Investments Commission (ASIC) which indicates that just over 60% relates to poor strategic management. Family businesses and SME’s in particular have the challenge of ensuring that they have the right level of key individuals to give the business the best possible chance of success.
Unsurprisingly, construction and retailing accounted for almost 33% of corporate insolvencies in 2012 (see diagram below – Industry Mix of Business Insolvencies). This in my view reflects the both the need for a focus of efficiencies and using technology in delivery of the product in these sectors.

Also for those of you that have been reading the headlines of late about the possible risks of a recession (in the press a risk of approximately 1:5 for 2014),diagram 2 – Australia’s Economic Growth  suggests otherwise. It can be seen from the research conducted going back to 1960 that the average business cycle in Australia is approximately 8.5 years and on that basis Phil is indicating that our economic growth may not hit zero until around 2018. It will be interesting to see what happens. 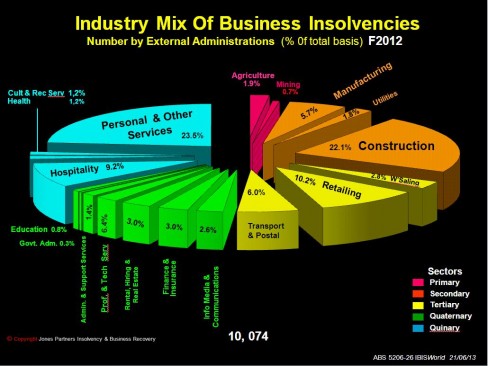 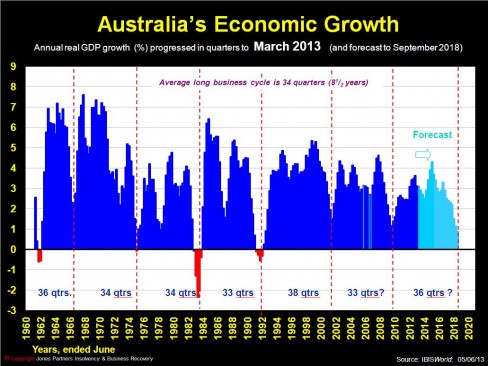